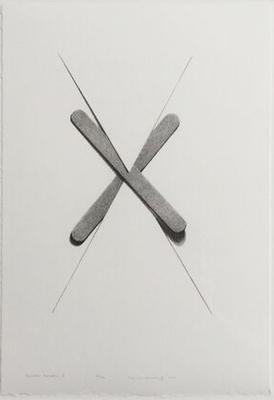 About the artist:  Charles Massey, Jr. (American b. 1942) was a faculty member in the Department of Art at The Ohio State University 1974-2013. His works, the majority as prints and drawings, have been featured in more than nine hundred exhibitions, with approximately 70 of them overseas.

His work has received more than 200 awards and is included in more than 90 public collections, including: the Library of Congress, The Art Institute of Chicago, The Philadelphia Museum, the Pushkin Museum in Moscow, the Whitney Museum of American Art, the National Museum of American Art, The Corcoran Museum of Art, and internationally in China, Egypt, England, Iceland, Japan, Korea, Poland, Romania, Taiwan, and the Ukraine. He has been listed in Who’s Who in American Art since 1978.