About the Artist:  Emil Ganso (German/American 1895 – 1941) was born in Halberstadt, Germany. Ganzo came to the United States as a teenager and took evening classes at the National Academy's School of Fine Arts. He first exhibited at the Society of Independent Artists in 1921, as well as at the Salons of America from 1922 to 1925. By 1925 Weyhe Gallery began to represent Ganso. This gave him the funds to spend the summer of 1926 in the art colony of Woodstock, New York, where he met many influential artists including George Bellows. Many of these Woodstock connections benefited him throughout his life.

Ganso received a Guggenheim Fellowship in 1933 that he used to study and paint in Europe. He also exhibited at the Corcoran Gallery of Art, Washington, DC; the Art Institute of Chicago; the Wichita Art Museum, Kansas; the Pennsylvania Academy of the Fine Arts; and the Whitney Museum of American Art. Ganso’s work was also exhibited at both the 1939 New York World's Fair and the Golden Gate Exposition in San Francisco that same year. He was awarded the Pennell Memorial Medal from the Pennsylvania Academy of the Fine Arts in 1938. As a result of the success of his art, Ganso was offered an artist-in-residence position in 1940 at the University of Iowa. It was there that he died in 1941 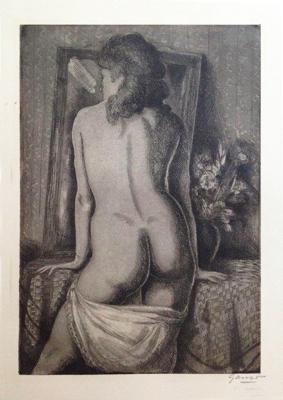