About the Artist: Kalman Kubinyi (Hungarian/American 1906 – 1973) graduated from the Cleveland School of Art in 1926 and continued his art studies in Munich.  He was a modernist whose interpretations of the machine age through “ash can” subjects and industrial scenes often bear the stamp of Social Realism.  His work was widely exhibited throughout the 1930s, including at the Venice Biennale (1937) and the New York World's Fair (1939).

He supervised the graphic arts division of the Works Progress Administration in Cleveland from 1935 until 1939, when the W.P.A. named him to head the entire Cleveland W.P.A. arts project.  During the 1930s, Kubinyi taught printmaking at the Cleveland School of Art (now the Cleveland Institute of Art), the Cleveland Museum of Art and others.  He founded the Cleveland Print Makers in 1930 and served as its president for 11 years. 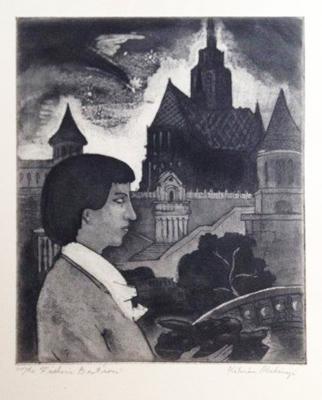