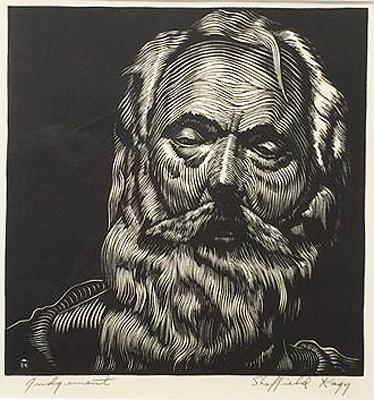 About the artist:  Sheffield Harold Kagy (American 1907-1989) was an American printmaker and muralist. Active as a printmaker in Cleveland in the 1930s, Sheffield Kagy specialized in block prints of contemporary scenes. Born and raised in Cleveland, he studied with Henry Keller and Paul Travis at the Cleveland School of Art and with Ernest Fiene at the Corcoran School of Art in Washington, D.C. Kagy was one of only two Cleveland artists to make prints for the Public Works of Art Project in 1934. He made several linoleum cuts and at least one lithograph for the Cleveland graphic arts project of the Works Progress Administration in 1936.

​Kagy was a vice president of the Cleveland Print Makers and showed his work in many local exhibitions. He participated in annual print exhibitions in Chicago, Cleveland, and Dayton, and his work also appeared in New York City, Washington, D.C., and Venice, Italy. Kagy moved to Washington in 1936 and taught fine arts and printmaking at the Abbott Art School. Modeled on the Cleveland Print Makers, Kagy organized the Washington Print Maker's Club in 1940. Kagy was head of the art department at Chevy Chase Junior College in Maryland, 1940–43, then served in the navy as a camouflage designer for the Bureau of Ships until 1945. After the war he became a professor of fine arts at the National Art School, a post he held until 1956. He was a designer for the State Department, 1959-73.